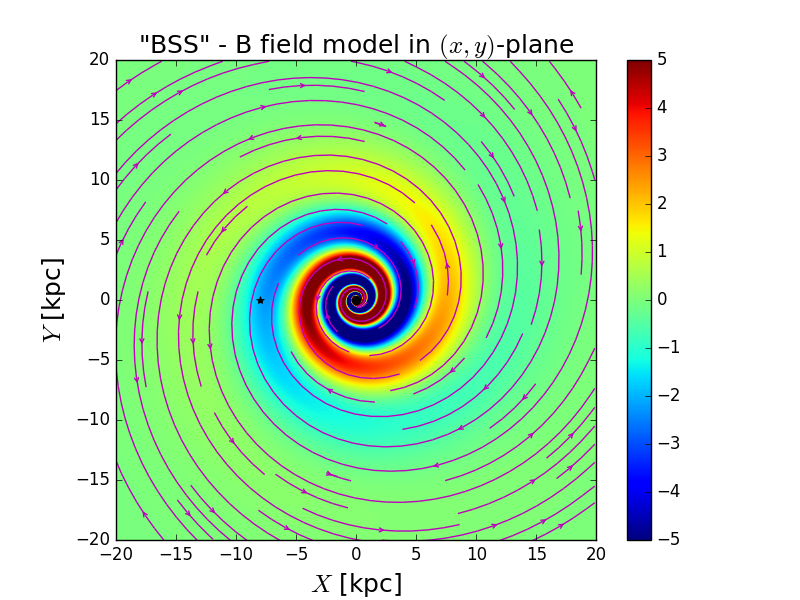 Our Galaxy is filled by an interstellar magnetic field that lies in the entire disk of our Galaxy and extends into the halo up to high Galactic latitudes. Matter and magnetic field couple in a complex way that leads to the emission of polarized light. In the domain of radio to submillimeter wavelengths, the polarized diffuse emissions are the synchrotron emission and the thermal dust emission, below and above about 80 GHz respectively. A goal of the RADIOFOREGROUNDS project is to use sky maps of the synchrotron and of the thermal dust polarized emissions to constrain Galactic magnetic field models.

The observational data are the I, Q and U Stokes parameters measured at different wavelengths. Our aim is to provide a reliable modelization of these maps and/or profiles that can be drawn from them. One of the first step is to provide a computer software package that allows for a fast comparison of the sky maps of the diffuse Galactic emission with models obtained from the combination of the Galactic magnetic field, matter density, and emission mechanism models. This computer software package is currently under development and should be delivered by the end of the project and made publicly available to the community. The codes contained in the package are written in Python language and are designed for friendly-user use. The main output of the codes are simulated maps of the Galactic diffuse emission from Galactic relativistic electrons and thermal dust, in intensity and polarization.

The package, currently named gPemPy, is divided in different Python modules. Each one is devoted to handle a specific part of the simulation production. As for now, the gPemPy software is made of four different modules:

Caption: Example of the predicted synchrotron intensity (left), polarized intensity (center) and polarization position angle of the projected magnetic field reconstructed from the synchrotron Q and U Stokes parameters, using gPemPy code for a BiSymmetric Spiral magnetic field model with a spherical amplitude modulation. The relativistic electron density has been taken as a simple cylindrical halo with height scale of 0.3 kpc and radial scale of 3.0 kpc. First and second maps have an arbitrary normalization.